Well, seems my workshop is currently in hiatus, I’ve been playing more Gundam Video Games to make up for it.  And while I’ve been currently online playing MS Gundam: Battle Operation (More on this later) I did manage to pick up the newest Giren’s Greed for PSP!

I’ve been excited to try this latest iteration out as may of you know, I’m a big fan of the series!  A LOT has changed this time around and I’m afraid my Kanji is as rusty as ever so I’m muddling through the menus a bit slow (but thankfully most of the categories are still the same!!)

Right off the bat, I was thrilled with the “Soldiers of Sorrow” theme song and a Giren’s Greed staple, an animated movie featuring all new “What If” scenarios including the Black Tri-Star’s in their custom Gelgoogs: 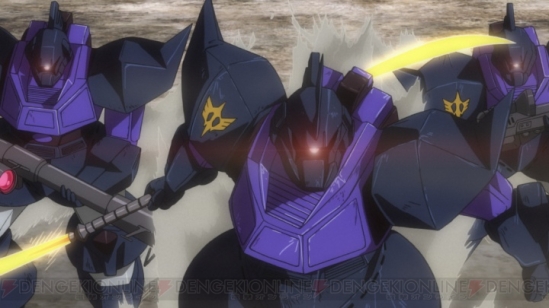 I was anxious to try out the new “Pilot” scenario, which is basically an watered down, limited command option, but its a great way to ease into the changes.  The old, sectioned off maps of Earth and the Earth Sphere (space) have been canned for a more, interwoven, one map for each area (Land and Space), much akin to the PS2 version, though a little easier to navigate.

One of the greatest changes, in my opinion, is the much more fluid and dynamic battle animations!  Instead of the old “stand there and shoot each other, than clunkily walk up and take a swing” model, the MS now have much more animated actions, and dash in for melee, then dash away when finished.  Plus there’s a more 3-dimentional element to the layout of the battles: 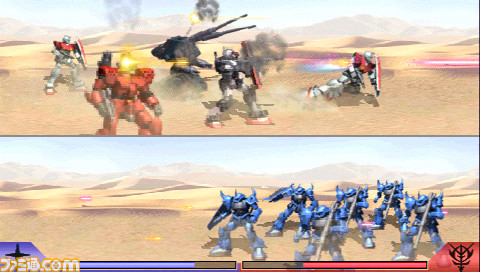 As always though, Giren’s Greed is known for it’s brutal learning curve so I don’t expect to get too far on my first play-through with Amuro.  Still, I’m quite happy to be delving into another Giren’s Greed title, and I look forward to G Generation Overworld later this month!

I’m going to post on Battle Operation later, as the “New MS campaign” is currently running and I just got myself an RX-79 Ez8 as well as the Gouf Custom and so far, I LOVE the Ez8!  If only so I’m not using my old GM that I’ve been running in for 3 weeks, lol.